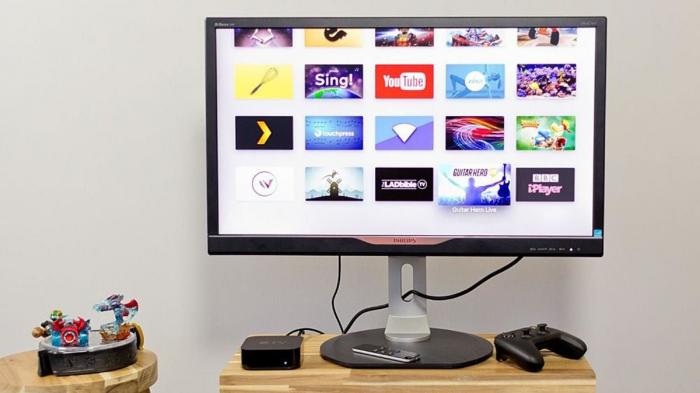 There are many choices out there when it comes to buying the best streaming device for your home entertainment needs. These include Apple TV, Amazon Fire TV Stick, Roku Streaming Stick 4K, and NVIDIA Shield TV Pro. If you're interested in saving some cash, there are a few other options that you may consider. If you're not sure which one is right for you, keep reading to discover the best streaming device for you.

Among the many streaming devices that have made it to market in recent years, Apple TV is still the best of them all. Its new 4K resolution, combined with the latest processor, make it a superior choice for most media streaming needs. It also boasts a touchpad on the remote that makes navigating streaming apps a breeze. It can even pair with a Bluetooth controller to play games. Here are three reasons why you should upgrade to the new Apple TV.

First of all, the Apple TV works with the entire ecosystem of the Apple company. The device is capable of purchasing and streaming movies directly from Apple's iTunes store. Apple TV also allows users to watch music and podcasts, play games on Apple Arcade, and use apps such as Fitness+. Apple's iOS operating system also enables users to cast content from their iPhone, iPad, or iPod to the television. The Roku Voice Remote Pro has a headphone jack and integrated Bluetooth wireless, making it easy to connect headphones. Furthermore, it supports Apple AirPlay and mirroring Apple devices. Apple TV is compatible with Netflix, Amazon Prime Video, Disney+, Hulu, and ESPN+.

Another great feature of the Apple TV is its support for 4K content. Its A12 Bionic chip is the same chip that powers the latest iPhones. It also offers a decent home console replacement with Apple Arcade. It also features a D-pad remote instead of a touchpad, which is useful if you have trouble controlling your TV. While it lacks AirPlay and Cast support, it is a decent alternative to the Shield TV Pro.

There are a few disadvantages to the Apple TV, though. While it's more expensive than the Roku and Google TV, it still has better performance and more features. Apple TV has more features, but it's not as easy to operate. Also, the interface is not as intuitive as the Roku or Google TV. The Amazon Fire TV Stick has a lot of advertisements. It's still a great streaming device, but you may want to consider the Fire TV Max if you plan to use it regularly.

When it comes to streamers, the Amazon Fire TV Stick is a great choice. It offers a large library of movies and TV shows, a variety of apps and features that are useful to many people. Its voice remote is voice activated, and it allows users to easily control the volume and playback of their favorite content. Although it isn't the cheapest streaming device, its specs are premium, and it's perfect for use in your bedroom.

The hardware of the Amazon Fire TV Stick is powerful enough to transform any TV into a smart TV. The specifications vary by model, but most feature a quad-core processor and one or two gigabytes of RAM. The devices are also quite power-efficient, with very few fan or cooling requirements. Because of the processor, the Fire TV Stick can handle 4K video, HDR, Dolby Atmos, and more.

The Fire TV Stick is a great choice for those who want a simple streaming device. It comes with a 1TB storage capacity and is compatible with major networks and streaming services. It also comes with a voice-controlled remote and an HD antenna to record content. The Amazon Fire TV Stick also lets you use Alexa to control your lights and other home appliances. The device also allows you to use your voice to control it, and it supports Google Assistant.

The Fire TV Stick 4K offers 4K resolution and HDR 10 and Dolby Atmos. It also has a new updated remote and a live TV guide. The price is super-low and is often on sale for under $30. The Fire TV Stick 4K and three other models come with full Alexa integration. You can use Alexa to manage your shopping list, research traffic conditions, or check the weather. All Fire TV models include a voice remote, so you can talk with Alexa with ease.

The cheapest Fire TV Stick is the Amazon Fire TV Lite. The Lite is essentially the same as the vanilla Fire TV Stick, but with a lower price tag and HD video output. While it lacks 4K video support, it's still a decent choice for users who don't want to spend too much money. Besides, it has voice control and Bluetooth wireless communications, so it's an excellent option for those on a budget.

Related Reading: How Much Is Discovery Plus in 2022?

If you're looking for the best streaming device on the market, the Roku Streaming Stick 4K is the best choice. Its compact design and high-quality speakers make it an excellent choice for home entertainment. Its newest version, which replaces the Streaming Stick+, supports 4K HDR video and Dolby Vision, as well as HDR10+ and Dolby Atmos audio. The new model also supports AirPlay 2 and plugs into an HDMI input for easy connection. Moreover, the stick draws power from a compatible USB port.

The Roku Streaming Stick 4K supports HDR and HLG up to 60 frames per second. It has a long-range Wi-Fi, which allows it to connect with a variety of devices, including TVs and other streaming devices. The device's HDR10+ picture and Dolby Vision support make it an excellent choice for those who want to enjoy their favorite movies and TV shows in the best possible quality. It is also compact enough to be hidden behind your television.

The Roku Streaming Stick 4K is the best streaming device for many reasons. The voice remote lets you browse and play favorite channels with just a few words. The device has 200+ Live TV channels on The Roku Channel. In addition, it supports hands-free voice control, which makes it easier to use than a physical remote. It also responds to voice commands, which makes it an excellent choice for those who love to watch live television.

Besides its superior picture quality and great selection of content, the Roku Streaming Stick 4K also offers an extensive library. With over half a million TV shows and movies available, it is a smart device for movie and television viewing. Unlike other devices, it supports 4K video and HDR streaming, so you can enjoy movies, sports, and live TV in glorious clarity. As for connectivity, the Roku Streaming Stick 4K is fast and reliable, and the Wi-Fi 5 is twice as fast as its predecessors.

Related Reading: How to Download Discovery Plus on PCs, Smartphones, and Tablets?

The NVIDIA Shield TV Pro is a great streaming device that supports Google Assistant and GeForce Now, as well as thousands of other apps. The Shield TV Pro can also be used as a game console, streaming content from apps like Netflix and YouTube. The built-in Dolby Vision HDR and Dolby Atmos offer immersive audio and a rich picture quality. The Shield's features and price point make it a good choice for people who want to enjoy the latest and greatest movies and television shows.

The Shield TV Pro has a surprisingly compact design and is powered by the Tegra X1+ processor. It features a voice search function and motion-activated backlit buttons that make it easy to control. It also has a large on-screen display. And, if you're looking for a good price, the Shield TV comes with a two-year warranty.

The Shield TV Pro's performance is superior to that of the Fire TV Cube, and the X1+ processor enables a number of new features. The Shield TV Pro includes Android TV games as well as retro gaming emulators. The downside to this device is that it doesn't have every single Android app. It's very difficult to browse through the app store, but the Shield TV Pro makes it easy to find the streaming apps you need.

The Shield TV Pro features a remote with a triangular prism-shaped button for easy navigation. This remote has an IR control, a Netflix shortcut button, mute, and navigation wheel, and can activate Google Assistant. There's also a built-in Google Home accessory to help you control your Shield TV Pro with your voice. You'll be able to enjoy a wider variety of content thanks to this device.

The NVIDIA Shield TV Pro connects to an HDMI port on your TV via an HDMI cable. The Shield TV Pro requires two AAA batteries. During setup, you can watch YouTube videos, watch movies, or surf the web. The process of connecting to the Internet is a snap, and it only takes a few minutes to install the apps. Just make sure to remember passwords, as they are often reset.